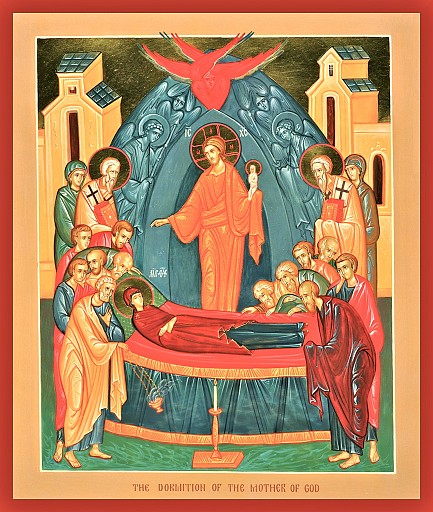 For nearly 1400 years, Christians have celebrated the dormition ("falling asleep") of the Virgin Mary on August 15.  In the Western Christian world, this feast is commonly known as the Assumption of the Virgin Mary, and thus, Holy Assumption Monastery celebrates its feast day every year in the middle of August.

The story of the dormition of the Virgin Mary comes from the Protoevangelium of James, and testifies to the good news of our salvation in Christ.  For, although she had given birth to God (hence her title Theotokos or "God-bearer"), the Virgin Mary was still subject to death, like all humanity.  The Apostles, scattered throughout the world in their labors to spread the Gospel, gathered miraculously in Jerusalem to witness Mary's repose.  But the Apostle Thomas did not appear until the third day after the death of the Theotokos.  He begged the other apostles to open the tomb of the Virgin Mary, that he might also bid her goodbye.  When the tomb was opened, everyone saw that it was empty! In anticipation of the general resurrection on the Last Day, Christ had already taken His mother bodily into heaven.  This is the future all Christians look toward: our life with Christ in the age to come.  Among many truths, the dormition and assumption of the Theotokos testifies to the universality of death, the life God promises to those who love Him, and the humanity and divinity of Christ, who loved His earthly mother and brought her into heaven to be with Him.  In the icon of the Dormition, the soul of the Theotokos appears as an infant in the arms of Jesus Christ, showing us that through Him, death has become birth into our eternal life with Him.The Orthodox Church does not worship Mary as God, but we venerate her as first among saints.  Next to her son, Jesus Christ, she is the best model for us to follow in our own Christian journey.  We ask for her intercessions with Him because we know God works through the prayers of those who call on Him.Every year, Holy Assumption begins the Feast of the Dormition with Great Vigil on August 14th, at 5 pm.  The following day, August 15th,  we read the Hours at 8:40 am, with Divine Liturgy at 9:00 am.  A celebratory meal follows the festal Liturgy.

Finally, on August 23rd, after a week of special hymns for the Mother of God, we celebrate the Leavetaking of the Feast with a final Divine Liturgy at 9:00 am.


However, in 2018 we will not be having liturgy on this date.Please consider joining us for any or all of the services of the monastery's altar feast.  This is an especially joyous time in the monastery, and we thank God for every person who is able to share it with us.To read more about the Dormition of the Theotokos, visit the website of the Orthodox Church in America (OCA).